Another Translation of Professor Vu's Poem

That makes me sad

The sun is brightly shining

The rain is suddenly pouring

The full moon hangs on the sky

The crescent moon will come

The thought of having lifelong memory

But is easily forgotten with time

Imagining a rock hard and durable

But is also easily rotten and broken

That is an unspeakable logic

Which is only understood from the heart

You could not see it with reason

All the deep and under

Your sorrows in your life

Are all non logical theory

This is the translation I find most pleasant to read of the three, although each one has interesting features.
Posted by Tom Leddy at 5:24 AM 1 comment: 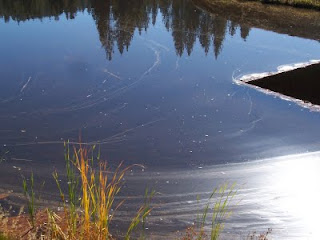 I thought that the triangle made this image somewhat fascinating. White Pines Lake is next to the little town of White Pines, near Arnold, California. We have had a cabin in the area for many years.
Posted by Tom Leddy at 2:16 PM No comments:

Prof. Vu Thi Kim Dung, Dean of the School of Philosophy/Social Science at Hanoi National University of Education visited San Jose State University this month and discussed aesthetics with me through translators. (I can thank my good friend Prof. Chanh Phan for providing translations for our second conversation.) Upon leaving, she sent me this poem. I have asked my students whether they could translate it, and so far two have come up with translations. They are included below. After the translations I will make a couple brief comments.

Because there’s no logic
Makes me feel sad
Bright sunny day
Suddenly rain pours heavily
The bright sun
Certainly rain pours heavily
The moon shines
The moon starts to disappear
Thoughts will be remembered forever
But gradually disappear
Though the rock will stay hard forever
But easy to break into small pieces
Early morning moisture
Light layer of moisture can destroy
On silent logic
Only way to be understood is from the heart
Only the heart can realize the truth
Mind is blind
Our deep vessels
All the pain in life
There’s no logic!

Because of Phi Logic
It causes us to (chanh buon)
The red sunlight is shining upon us
Suddenly hoping for rain
The moon is bright and round
Then turns crescent right after.
Person you think you would never forget
Retreat far back in your memory
Rock that you think would be sturdy and strong
Suddenly get broken so easily
Small clear dew
Last a life time
A logic with no spoken word
Only the heart can comprehend
How can logic see through it
The nerved underlying so far

All the pain in life
Thought it was phil logic

The two translations are quite different, however I do have a sense that this poem is similar to many translations I have read of Asian poems. The theme of the temporariness of human existence is common amongst Japanese and Chinese poets for example, as also is the reference to natural phenomena. The criticism of logic is a somewhat unsusual aspect of this poem. I surmise that Prof. Vu (as they put it in the Vietnamese tradition) was suggesting that the aesthetic dimension of human experience is not captured by philosophical logic partly because it cannot capture apparent contradictions (the dew that seems to last a life-time, the rock that is broken easily). Perhaps she is suggesting that the aesthetics of everyday life is a worthwhile endeavor but not if subordinated to discursive reason. As she puts it, "only the heart can realize the truth" at least in these matters. On the other hand, perhaps there is an alternative logic, a "silent logic" that will do the trick here. It is interesting that after all the references to pleasurable natural phenomena the penultimate line refers to all the pains in life. Perhaps the pains of life make the attempts to capture the changes in nature in logical language sad and hopeless.
Posted by Tom Leddy at 1:33 PM No comments: